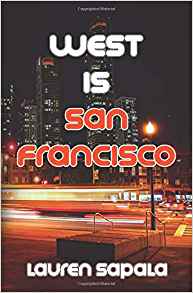 (Disclaimer: Lauren Sapala and I are trading reviews of each others’ novels released in 2019. I look forward to reading her review of The Traveling Triple-C Incorporeal Circus.)

Addiction stories can be difficult. On the surface, they can follow very similar tropes: the slow descent, the bottoming out, the moment of realization, the claw back to the surface and the hard-won victory. At first that seems to be what West Is San Francisco, a 2019 novel, is moving towards. But Lauren Sapala makes protagonist Leah’s struggle against alcoholism part of a larger tapestry of dysfunction and self-hatred in her life. She sees herself in the beginning as “a drunk”, but that ends up being only a fraction of her life and experiences. Addiction colors her worldview, but it is not her world, which I did appreciate.

West Is San Francisco is the second book in the West Coast Trilogy, following Sapala’s debut Between the Shadow and Lo in 2017. I have not read the first book, but it is easy to jump into Leah’s world and headspace here, first painted in broad brushstrokes and then later detail added as Leah herself ends up soul-searching in her path to recovery. When she is drawn into the appeal of a cult-like writing group in San Francisco, you can feel the pain and vulnerability that make her so susceptible to the charismatic leader. (Sapala also writes abusive workplaces with a keen capturing of tone and lots of details. The writer-networking company that Leah works for had me squirming in sympathy.)

Rather than having a firm narrative, West is San Francisco takes a more broad-scope approach, showing you the everyday ups and downs of Leah’s life, set against her struggle for sobriety and the oddities of San Francisco itself. I imagine some of this is drawn from Sapala’s life itself, as the West Coast Trilogy is described as an “autobiographical fiction series”. Some of the vignettes drift a bit too close to the grotesque for my tastes, but they always feel very lived-in.

With fast-moving prose and an engaging protagonist, West Is San Francisco captures the three years it covers richly and vividly. I am intrigued to see where Leah’s journeys take her next.

My name is Alanna McFall and I am a novelist and playwright based out of the Bay Area. Short story writer, Resident Playwright with PlayGround SF, winner of the 2019 June Anne Baker Award for playwriting, and author of the paranormal novel The Traveling Triple-C Incorporeal Circus!

If you would like to contribute to my work, you can support me on Patreon.